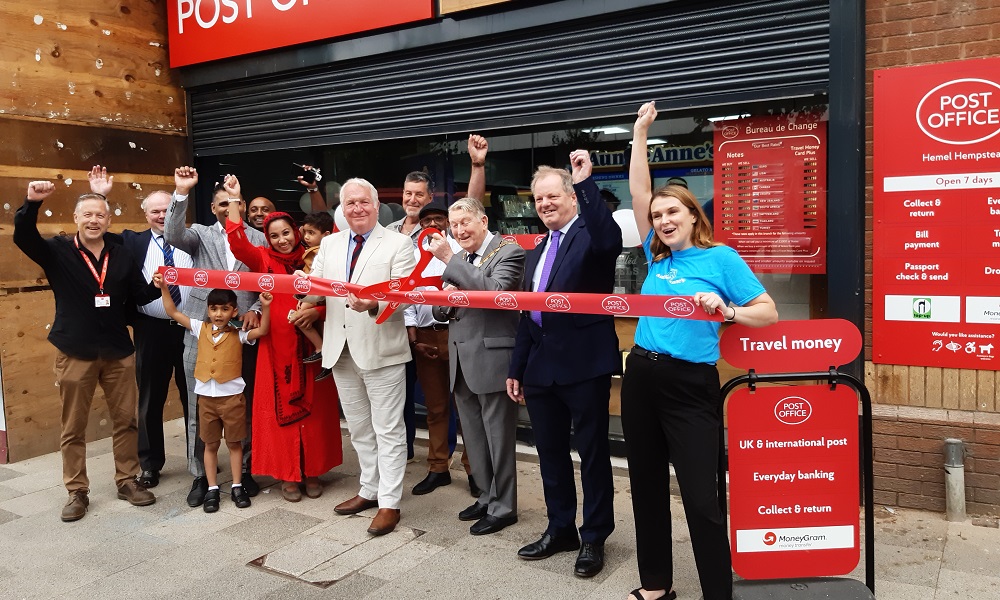 “People were worried when they heard that their main Post Office in Hemel Hempstead was to close. They are very relieved that a replacement branch has opened. I want to thank Postmaster Saf Abdeen for starting this new business. The modernised premises look great.”

“A Post Office in Hemel Hempstead town centre is vital for residents, businesses and visitors. Saf, as an experienced Postmaster, fully understands the Post Office’s important business and social purpose. I wish him well.”

“A Post Office is at the heart of a community. The re-opening of the branch at a new location is the equivalent of a heart transplant. Hemel Hempstead will also benefit from the experienced Postmaster and staff operating this branch.”

Saf had also opened an Auntie Anne’s concession, selling freshly baked pretzels. The company was started in America in 1988 by Aunty Annie who was raising money for a community centre. There are now 2000 stores in 30 countries including 45 in the UK. This is the first time that there has been a Post Office alongside an Auntie Anne store.

The previous Post Office at 181-183 The Marlowes closed in May when the lease expired.

Staff from the previous Post Office branch now work in the re-located Post Office. New people have been employed to work on the retail side of the business.

This is longer hours than previously opening hours, making it more convenient for customers to visit.

Saf has been Postmaster for Walthamstow, another busy town centre branch, in East London since 2018. So, he and his Post Office staff are already experienced at providing the full range of Post Office products and services on offer at Hemel Hempstead branch.

“The community is really appreciating that I have opened a replacement Post Office in Hemel Hempstead town centre.

“My other Post Office is alongside a Nisa Local convenience store, but each town is different and I looked to see what was already there, what store alongside the Post Office had closed and I felt there was a need for cards, gifts, stationery, drinks and snacks. I also felt that Hemel Hempstead would welcome an exciting Auntie Anne’s pretzel shop and there aren’t many of them in the UK. I look forward to serving the residents and businesses of Hemel Hempstead.”